How to Use Money Flow Index to Trade Crypto 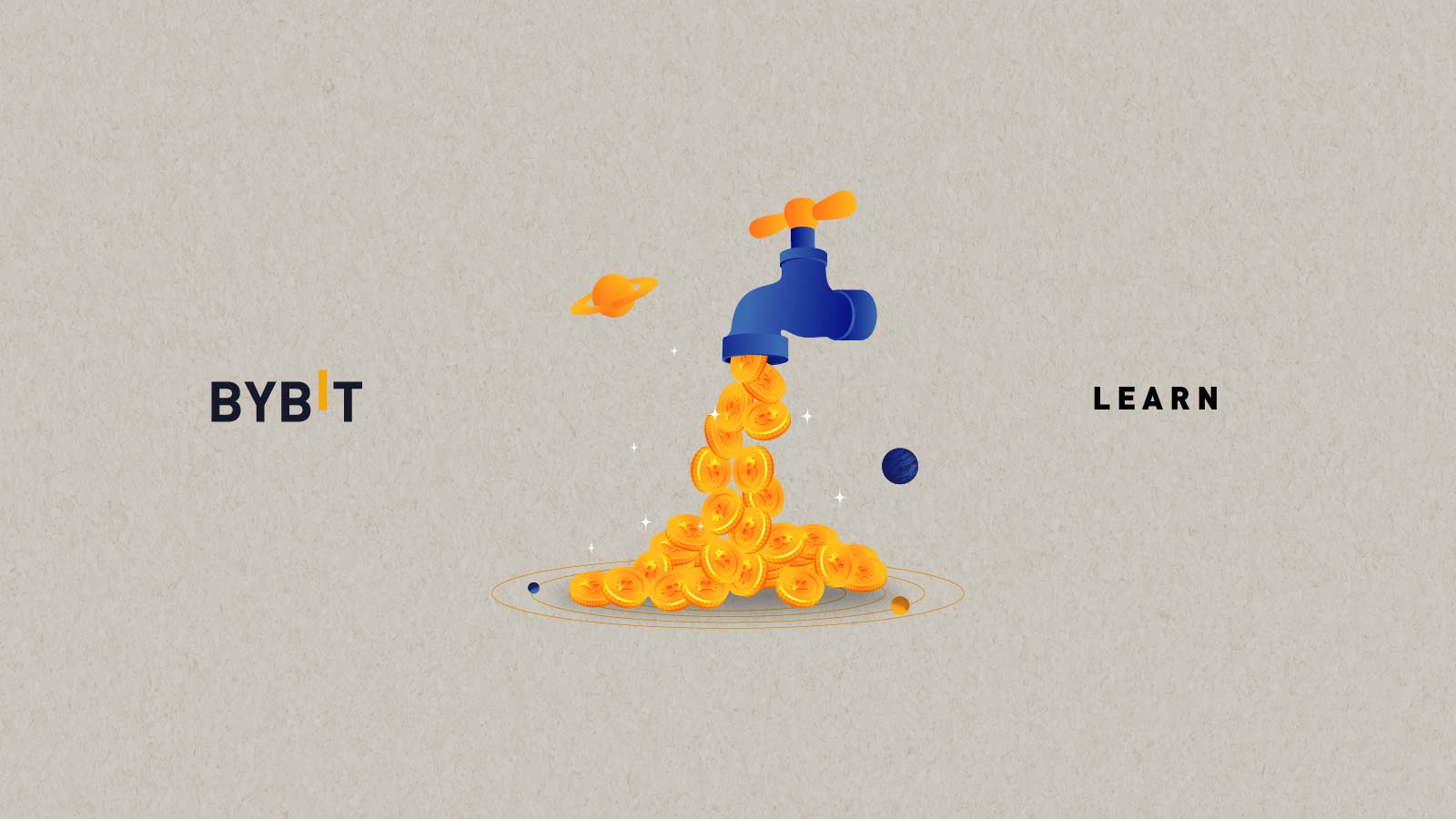 What Is a Money Flow Index (MFI) Indicator?

The Money Flow Index, or MFI, is a tool used in technical analysis for measuring momentum in a financial asset by showing the inflow and outflow of money into that asset over time.

The MFI analyzes both price and volume, and generates a bounded oscillator that indicates when the asset may be overbought, oversold or diverging from price. The MFI is easy to read since the oscillator appears as a separate window toward the bottom or top of the chart. Additionally, the MFI is versatile since it can be applied to any financial asset.

However, MFI is especially useful in crypto as the flow — or volume — of trading activity factors into the oscillator’s calculation. In addition, we can use this volume at the intraday level. As a result, many experienced traders consider the MFI to be a “volume-weighted RSI,” as it resembles the Relative Strength Index (RSI) while also including volume.

MFI is a bounded oscillator, with its values standardized between 0 and 100. The default setting is 14 periods and is typically viewed on the daily chart time frame. This is because the volume can be starkly different depending on the time of day. Therefore, daily time frames will automatically incorporate slow and fast trading sessions.

The MFI Formula and Calculation

To understand how the index works, let’s first review the formula and how to calculate it. Fortunately, you don’t have to be familiar with math to use the indicator. Charting software automatically does these calculations for you, and there’s no additional work needed on your part.

If you’re not interested in the math behind the formula, you can skip to the next section of this article (How to Use Money Flow Index to Find Divergence).

The ingredients going into the calculation include:

There are three steps involved in deriving the formula. The first is to calculate the typical price, as defined below:

Let’s assume we’re using a daily chart for Bitcoin. The typical price for yesterday’s candle would be the sum of the high, low and close prices, divided by 3.

When using a 14-period input for the MFI, this means we’ll need the “typical price” for each of the previous 14 days, which a trader gets by making technical adjustments to the indicators to accommodate extremely large ranges and wicks.

Next, we need to incorporate the money flow into the typical price.

Now we arrive at the final calculation for the MFI.

Now that we have these calculations in place, let’s apply the MFI to the charts to identify trading opportunities.

How to Use Money Flow Index to Find Divergence

Divergence is a silent but powerful alert which oscillators provide. Since the MFI includes volume within its calculation, traders would argue that the divergence witnessed in crypto using MFI may be even more powerful than divergence indicated by other oscillators. 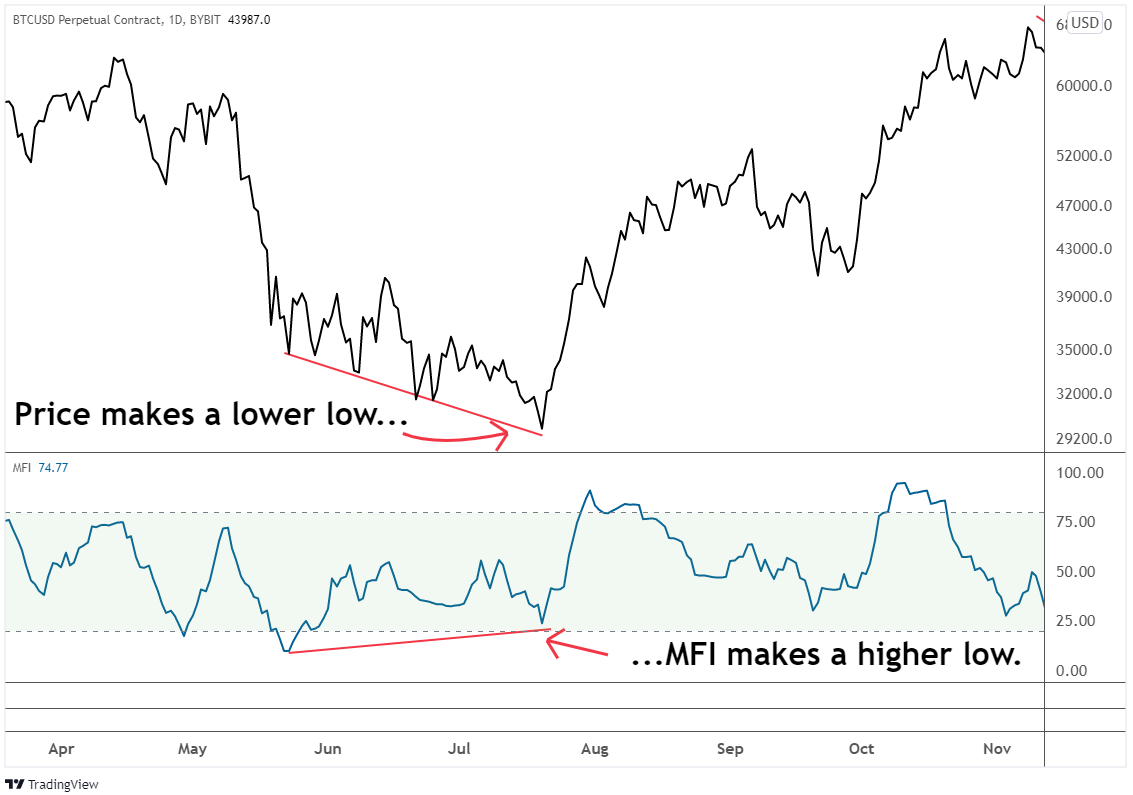 On the Bitcoin monthly chart above, note how the price of Bitcoin keeps grinding lower through July of 2021. During this same period, the MFI creates a higher low (see red lines). This suggests that there’s not as much negative volume as there was back in May 2021.

A trader could use this divergence to buy Bitcoin. In divergence situations, I would recommend waiting for a bullish candlestick formation to appear, or for resistance levels to break. 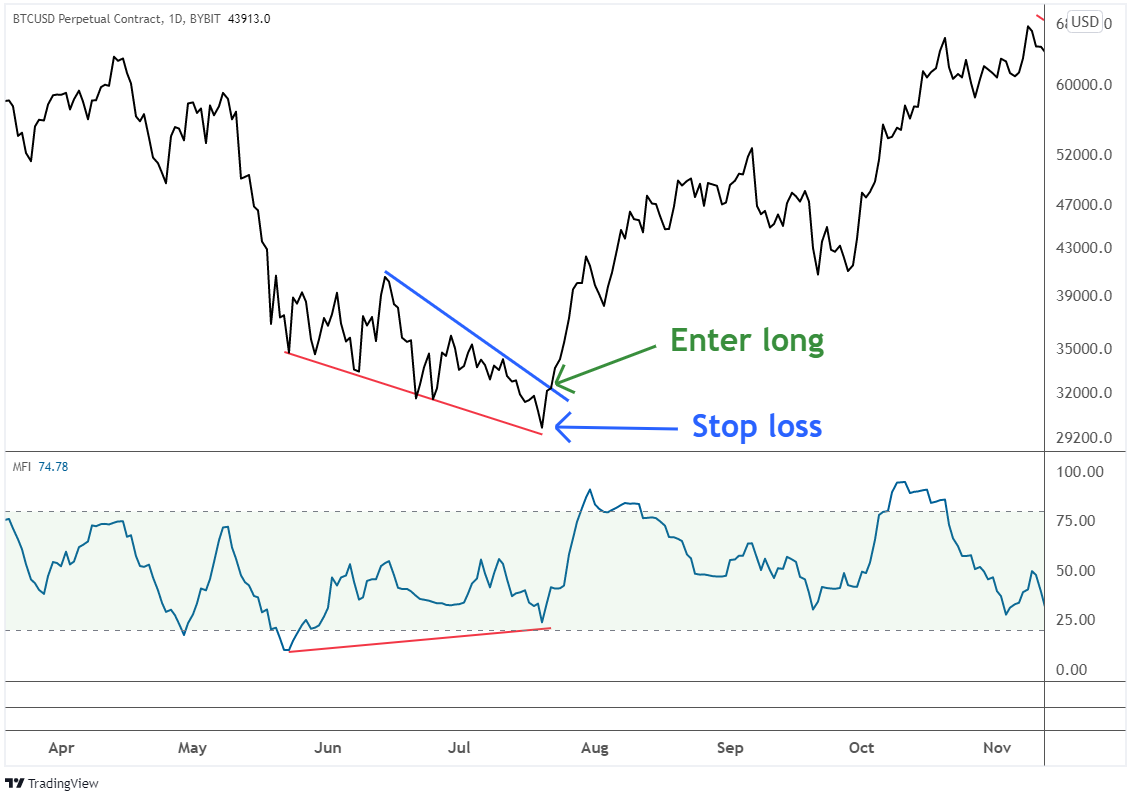 The divergence alert above eventually leads to a 100% rally in the price of Bitcoin.

Divergence can also be a bearish alert that the rally is losing momentum, and is about to reverse lower. 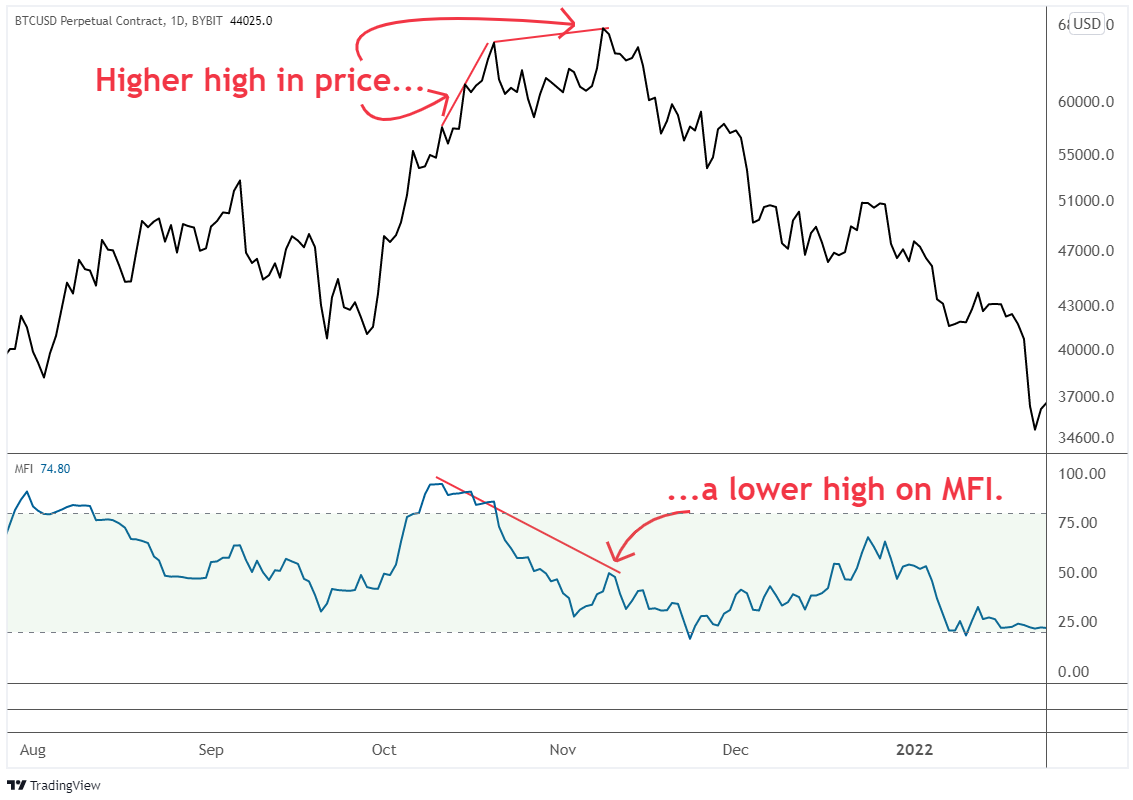 If we fast-forward to November 2021, Bitcoin has been experiencing several instances of bearish divergence. After the October 11 high, Bitcoin’s price keeps climbing higher, while the MFI is drifting lower. This suggests that large money investors aren’t adding to their positions, and may quietly be heading for the exits.

This divergence becomes more pronounced as Bitcoin pops one last time into a new all-time price high — while the MFI is well below its corresponding high. 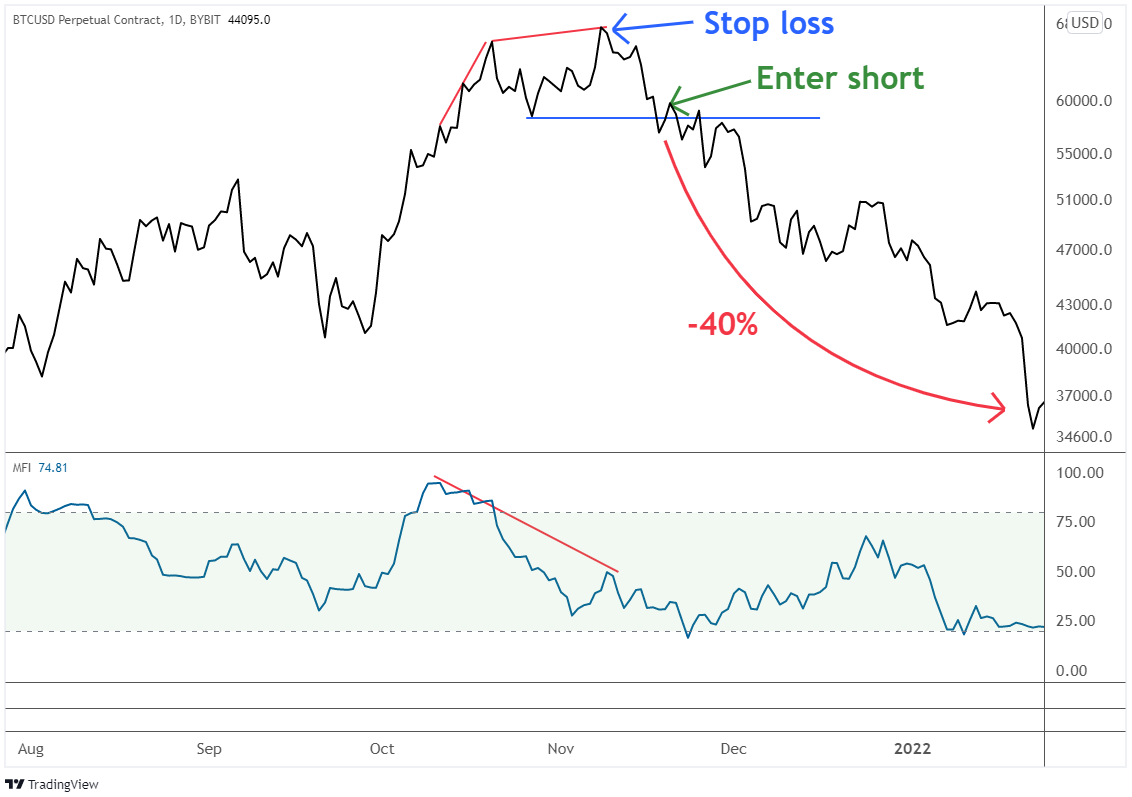 This bearish divergence signals the potential for a bearish reversal. Therefore, traders seek out levels of support and determine a level that, when broken, suggests the trend is shifting from up to down. A stop-loss would be established just above the recent swing high.

Above, we can see a horizontal level of support which, when it breaks, leads to a 40% decline in the price of Bitcoin. This downtrend was alerted using divergence on MFI.

Divergences are not the only alerts that MFI provides. We can use extreme readings of the oscillator to indicate when the market may be overbought and due for a correction, or oversold and due for a rally.

Overbought zones are considered above 80 on MFI. This is generally associated with price and volume rising rapidly in a small amount of time. Overbought zones imply the market has risen too far, too fast, and is due for a correction.

Therefore, if MFI reaches above 80, then crosses back below 80, a sell signal is generated.

On the other hand, oversold zones for MFI are when the oscillator drops below a reading of 20. When MFI is this low, it means that price has fallen fast on rising volume. This behavior is generally thought to be bullish, as the price has moved too far and too fast to the downside.

When the MFI line pushes below 20, then crosses back above 20, a bullish signal is generated as the downward pressure is alleviated.

Therefore, experienced traders will look for other symptoms of a reversal to combine with the overbought and/or oversold signal. 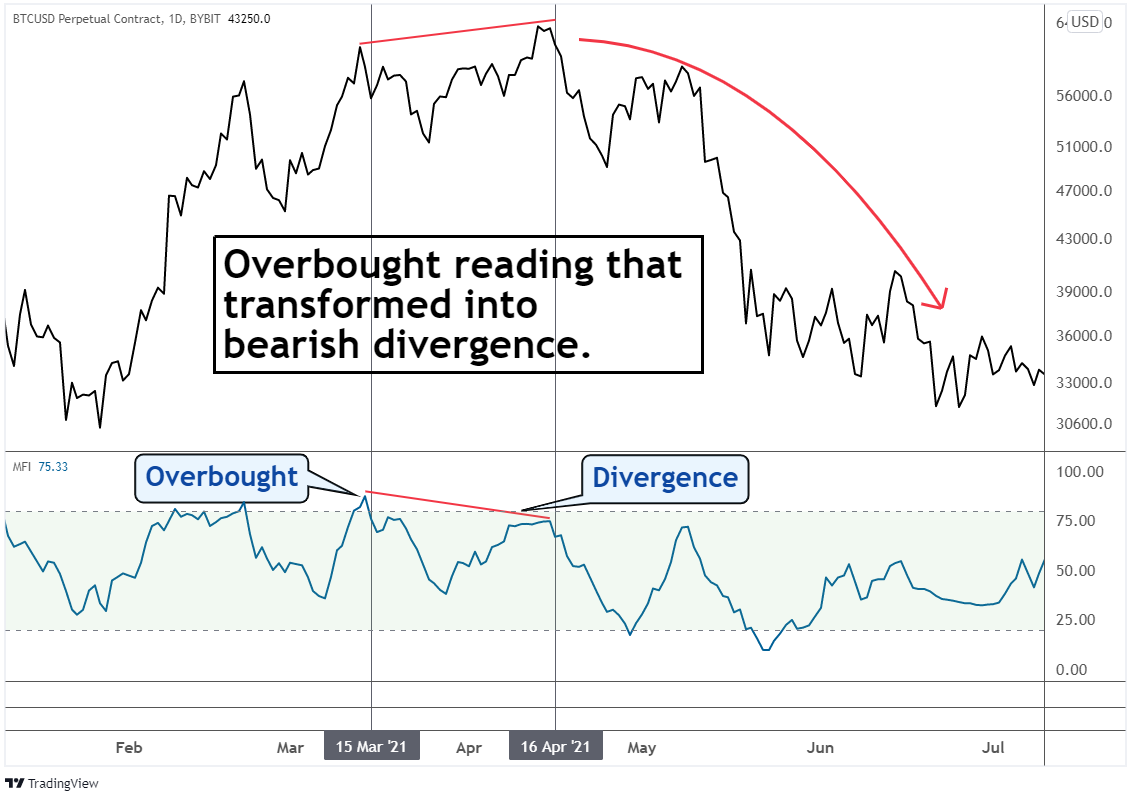 For example, if MFI moves into overbought territory, an experienced trader may then wait for a bearish divergence alert to appear. Returning to Bitcoin, in the above chart, MFI reaches overbought levels and crosses below 80, which typically becomes a sell signal.

However, many big reversals tend also to display the price and MFI divergence going into an extreme price reading. From March to April 2021, Bitcoin’s MFI reading falls from the overbought zone, then the price pops to one last new high on diverging MFI. 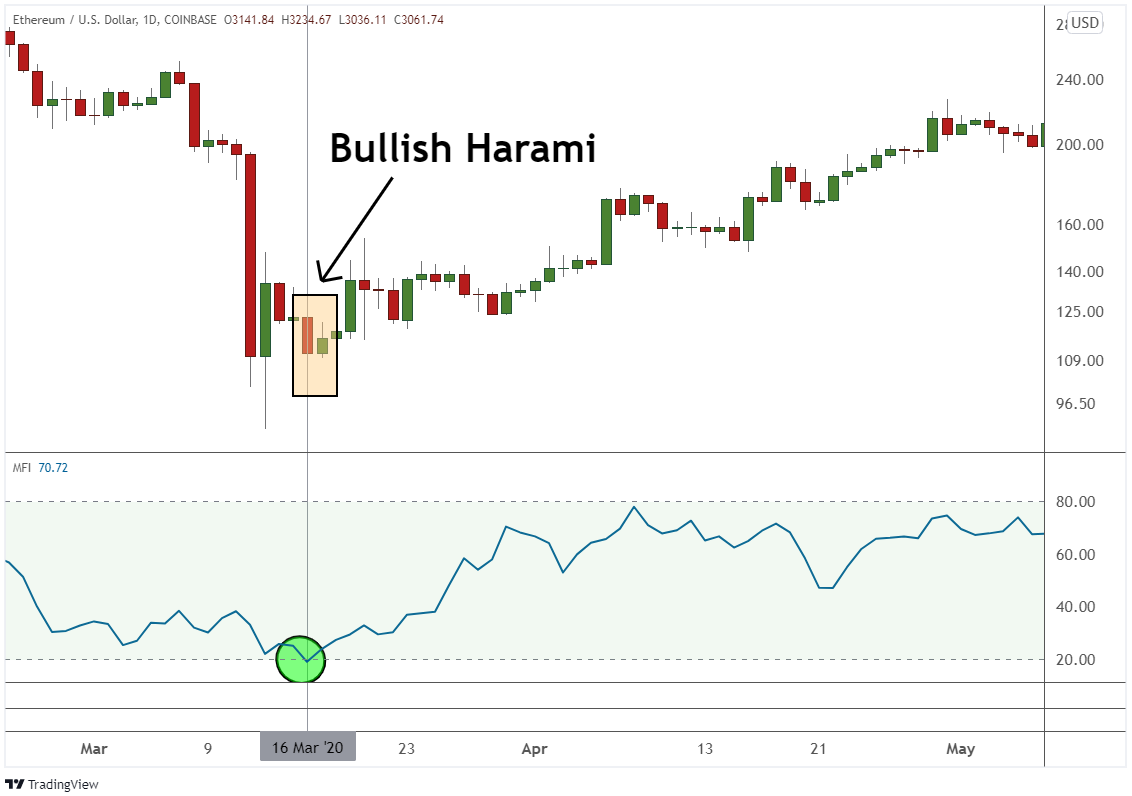 Another effective combination with MFI is looking for candlestick formations to help confirm the overbought or oversold signal. If we take a look at Ethereum during the March 2020 collapse, we’ll find that as MFI crosses into oversold levels, a bullish Harami is forming.

This bullish Japanese candlestick formation is signaling support for the market after it’s reached extremely oversold levels. As we now know, Ethereum went on to increase 40x from that low.

The MFI and RSI (Relative Strength Index) indicators are very closely related, with many similarities.

However, MFI and RSI are not the same, with two sharply contrasting differences.

First, MFI automatically calculates and uses the “typical price,” whereas the RSI formula is based solely on the close price of the candle. Traders can change the input of RSI to include “typical price,” but that input is not native to RSI’s calculation.

Secondly, MFI incorporates trading volume into its formula, while the RSI is purely price-based. Proponents of volume analysis believe MFI can forecast trends and warn of possible reversals in a more timely fashion than the RSI. 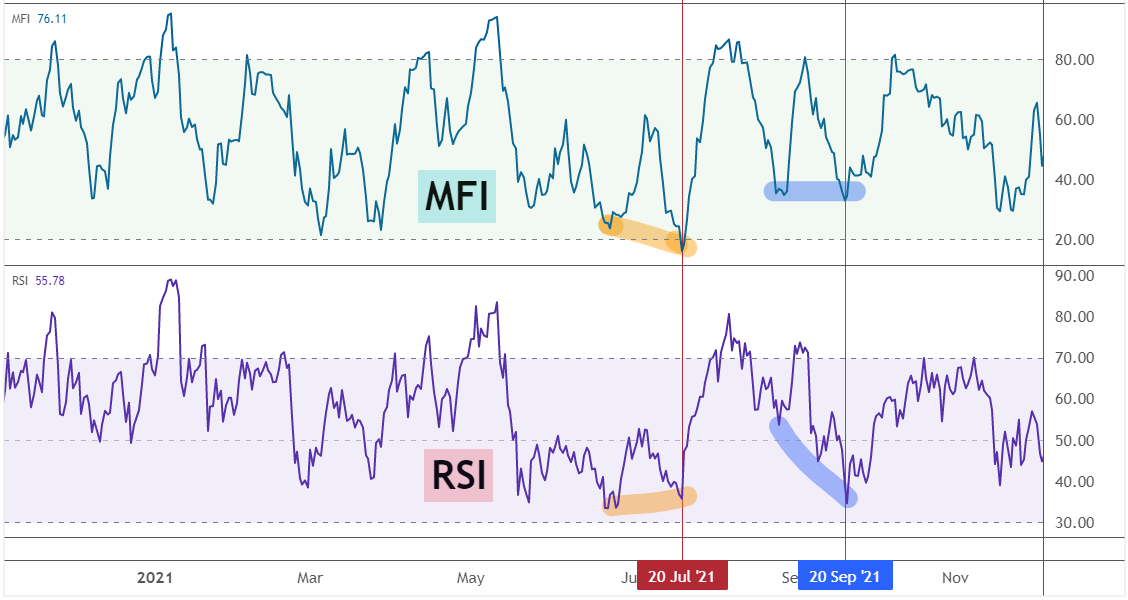 When we look at MFI and RSI next to each other on the same 14-period look-back setting, it’s obvious that most of the ups and downs in the oscillators are similar to one another.

There are some differences from time to time that can be attributed to the asset’s volume. For example, during the orange highlight above, notice how the right low on MFI is lower than the RSI low. This suggests that the volume to the downside during that period is heavier, causing the MFI to become oversold.

RSI doesn’t show the same strength to the downside. A trader would have caught a bullish signal using the MFI, but no such signal would generate for RSI.

On September 20, 2021 (blue highlights), MFI creates a secondary low that is equal to its first low. Meanwhile, RSI’s secondary low is lower than its first. This suggests that downside price action is strong, but MFI is telling us that the volume has been low during that downward slide.

Due to the additional input of volume, we can tell that a downward trend would likely prove temporary due to the lack of downside volume.

Some traders refer to the MFI indicator as an enhanced version of the RSI indicator. By including trading volume into its formula, the momentum of trends can be seen more clearly, since many experienced crypto traders believe trends follow volume.

As a result, MFI traders look for divergences between price and the MFI indicator to suggest a weak trend ripe for a reversal; or they trade extreme readings of the MFI, as the market appears to have moved too far, too fast.