Ethereum Difficulty Bomb: What You Need to Know

On June 30, 2022, the Ethereum (ETH) blockchain activated the Gray Glacier, its latest system update. One of the key announcements from this update was concerned with the delay in detonating the “Ethereum Difficulty Bomb.” In fact, the Gray Glacier’s sole purpose was to postpone the bomb’s detonation by another 100 days.

In this article, we’ll look at what the Ethereum difficulty bomb is, why it’s necessary, and how its delay affects the Ethereum blockchain.

What Is the Ethereum Difficulty Bomb?

As the mining difficulty increases, it eventually leads to a point at which the mining becomes impossibly difficult, or rather totally unprofitable. ”Mining difficulty” here refers to the hash rate, or the amount of hash power that miners have to expend to solve a block of transactions.

However, the Ethereum development team has significant leverage to affect the bomb’s timing via updates and patches. Ever since its introduction as a concept, several system updates have been implemented to delay the bomb’s “detonation.”

The Timing of Difficulty Bomb Updates

While triggered in August 2015, the increase in difficulty only became noticeable a year later, in November 2016. Since then, several hard fork upgrades have delayed the bomb’s detonation, i.e., the point at which ETH mining becomes practically useless. These updates included:

Among these upgrades, Muir Glacier and Gray Glacier were specifically implemented for no purpose other than to delay the difficulty bomb going off. 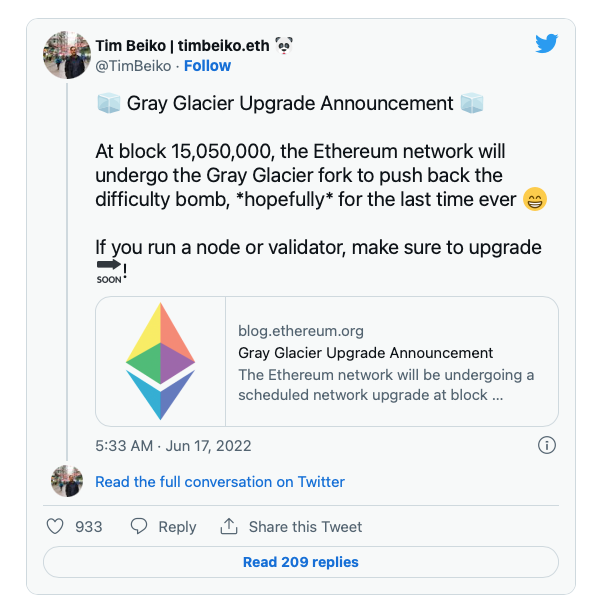 The Gray Glacier update delays the bomb by around 100 days, with the expected detonation date pushed to late September or October 2022.

Why Is the Ethereum Difficulty Bomb Necessary?

Multi-year delays in the bomb’s detonation aside, you might be wondering why this difficulty bomb is necessary at all. The answer lies in the long-planned move of the blockchain from its current proof of work (PoW) block validation method to the more efficient proof of stake (PoS).

Ethereum 1.0 Inefficiencies and the Launch of the Beacon Chain

The current main Ethereum chain, Ethereum 1.0, was launched in July 2015 and is based on the same PoS block validation system as Bitcoin. Unfortunately, PoW is extremely energy-intensive, slow, and limiting. As a result, despite being the world’s premier platform for decentralized apps (DApps), the Ethereum network clunks along at an abysmal speed of just 12 to 25 transactions per second (TPS). While this is still faster than Bitcoin’s speed of 7 TPS, it’s much slower than what the vast majority of PoS chains are capable of. 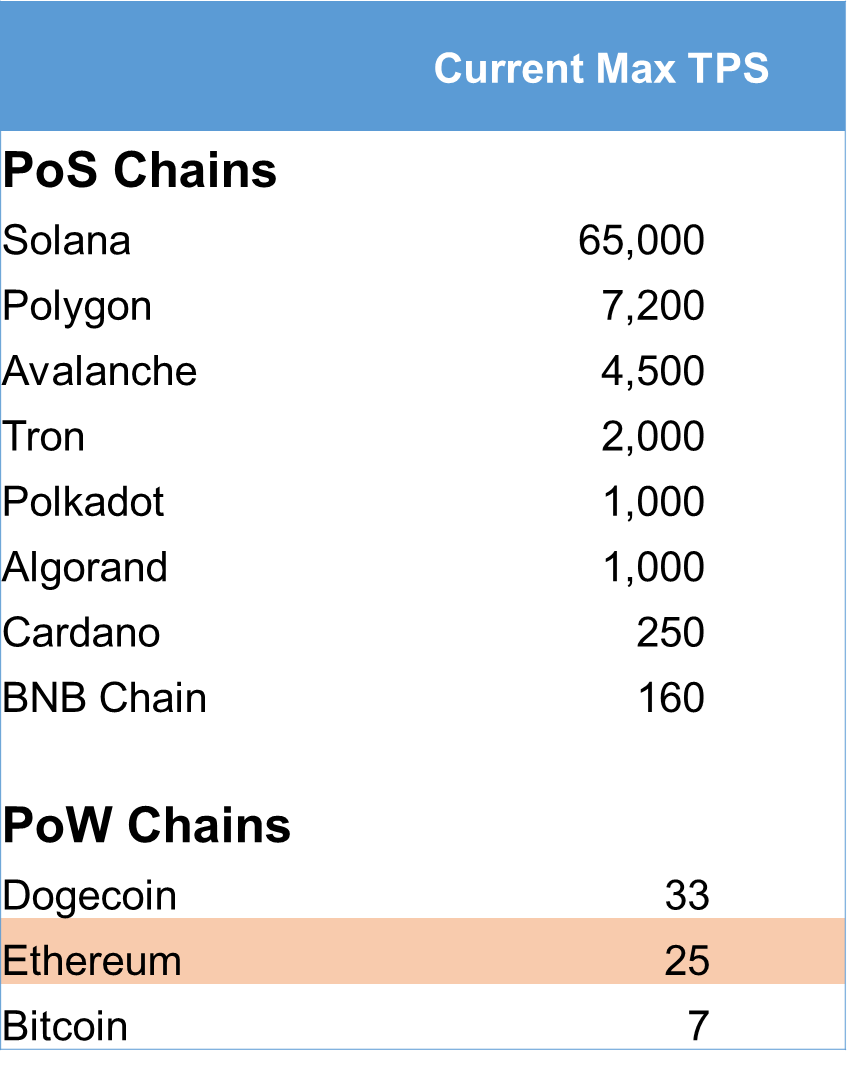 This limitation in speed — coupled with the vast collection of more than 3,000 functioning DApps on its network — has caused significant network congestion issues and made Ethereum one of the least affordable chains to use. The Ethereum blockchain has what are probably the highest transaction fees among all the popular DApp-capable platforms.

Even back in 2015, Ethereum’s co-founders and development team foresaw the problems that PoW consensus validation would eventually cause for the network. Future plans were made to create Ethereum 2.0, a PoS-based version of the network.

Ethereum 2.0 was envisioned as a sharded platform, with each shard being a separate subchain operating in parallel with the other shards on the network. There would be up to 64 shards, and a “super-chain” that would control and coordinate the shards. When the current Ethereum 1.0 chain stops producing blocks, it will become one of the shards.

Forcing the Migration to Ethereum 2.0

Moving from an inefficient PoW network to the much more scalable Ethereum 2.0 seems to be a win/win situation for all parties involved: Core developers, co-founders, user community, DApp operators — and just about anyone else.

However, the miners who power the operations of Ethereum 1.0 were never going to be impressed with the move. These miners, along with numerous individuals and businesses, have invested vast amounts of money in PoW mining machines for Ethereum 1.0. A move to the PoS platform will render all that equipment and business setup obsolete.

At the same time, Ethereum needs as many parties as possible to participate in block validation on the new PoS platform. Ethereum's difficulty bomb is designed specifically to address this issue, as its ancillary goal is to entice miners on Ethereum 1.0 to turn their resources and efforts to staking on Ethereum 2.0.

When mining blocks on the current PoW-based Ethereum blockchain becomes futile due to the explosion in difficulty, the miners (at least a good proportion of them) will hopefully join the ranks of Ethereum 2.0 validators.

Why Is the Ethereum Difficulty Bomb Being Delayed?

The key reason for the continual delays in the difficulty bomb detonation is that Ethereum’s core developers and key stakeholders don’t consider the network to be ready for a complete migration to PoS. Since Ethereum is home to so many DApps, any switch over to the new network must be carefully prepared.

Before the launch of the Beacon Chain, Ethereum 2.0 was still largely a concept in development. During those years, the difficulty bomb was mostly a reminder to the miner community to prepare for the future migration. However, since the Beacon Chain went live, there’s been an ongoing anticipation of the actual move to Ethereum 2.0.

Unfortunately, the development effort has experienced setbacks that keep causing the bomb’s detonation to be delayed, and delayed … and delayed some more. After the Gray Glacier update, we’re now being promised the big explosion sometime in September or October. If, at that point, there’s another delay, you can expect some jeers and pointy satire from Ethereum’s competitors. By now, the Ethereum difficulty bomb has already become the lengthiest delay in the blockchain industry, having eclipsed Cardano’s four-year wait, from 2017 to 2021, in introducing smart contracts.