The Graph (GRT): Search Engine of the Future

Just as web2 needs Google to index data, which makes the data more organized and accessible, web3 also needs a protocol to help weave all the data in the blockchains together, so end users can easily query for data. This is where The Graph with its indexing abilities comes in. The search engine of tomorrow, The Graph has the potential to impact the future of all decentralized networks and cryptocurrencies.

What Is The Graph?

The Graph is a decentralized protocol used to index and query data from the Ethereum blockchain, EVM-compatible chains and Layer 2 chains. Currently, The Graph supports 31 blockchain networks including Fantom, Cosmos and Arbitrum. The data is extracted, processed and stored by open-source application programming interfaces (APIs) called subgraphs.

Subgraphs are indexes for a specific query that form part of a global graph of blockchain data. They can be transferred to enable all the developers to query data with a few clicks using GraphQL, The Graph’s programming language. 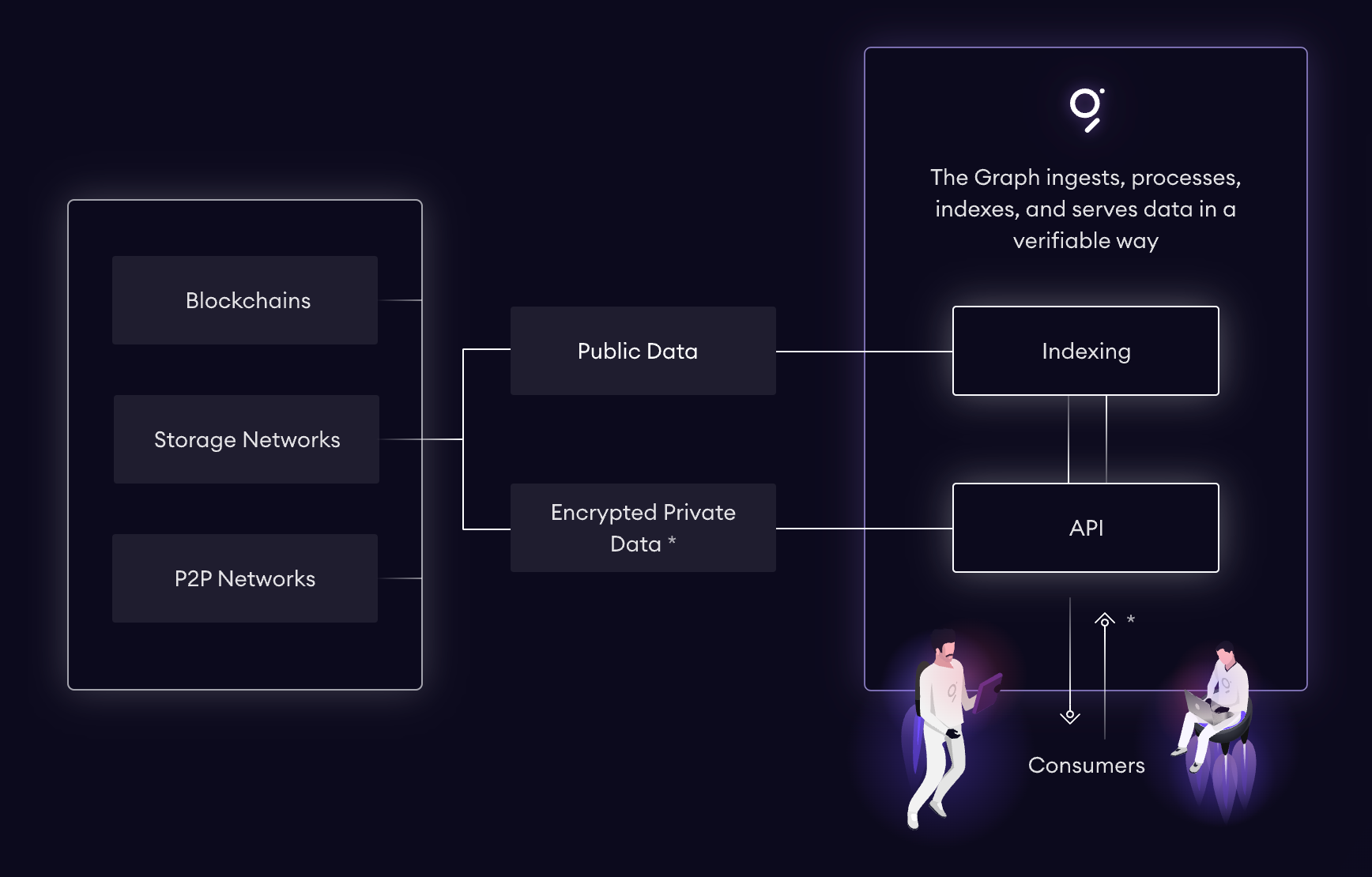 Because of its powerful indexing capabilities, The Graph has been dubbed “the Google for blockchain.” Most information in smart contracts, whether it’s encoded in decentralized applications (DApps) or NFTs, cannot be read directly by simply interacting with the contract. One of the biggest challenges facing blockchain developers is the length of time it takes to retrieve data.

Developers end up having to create centralized indexing servers to accommodate the queries, which is contradictory to what web3 is trying to achieve. The Graph tackles both issues with its indexing protocol, enabling blockchain data to be queried in a decentralized, fast and efficient manner.

Co-founded by Yaniv Tal, Jannis Pohlman and Brandon Ramirez in 2018, the Graph has raised $19.5 million since 2019, including $10 million in token sales during its launch in October 2020.

How The Graph Works

The Graph ecosystem consists of six main actors who interact with each other to retrieve and organize data via subgraphs. 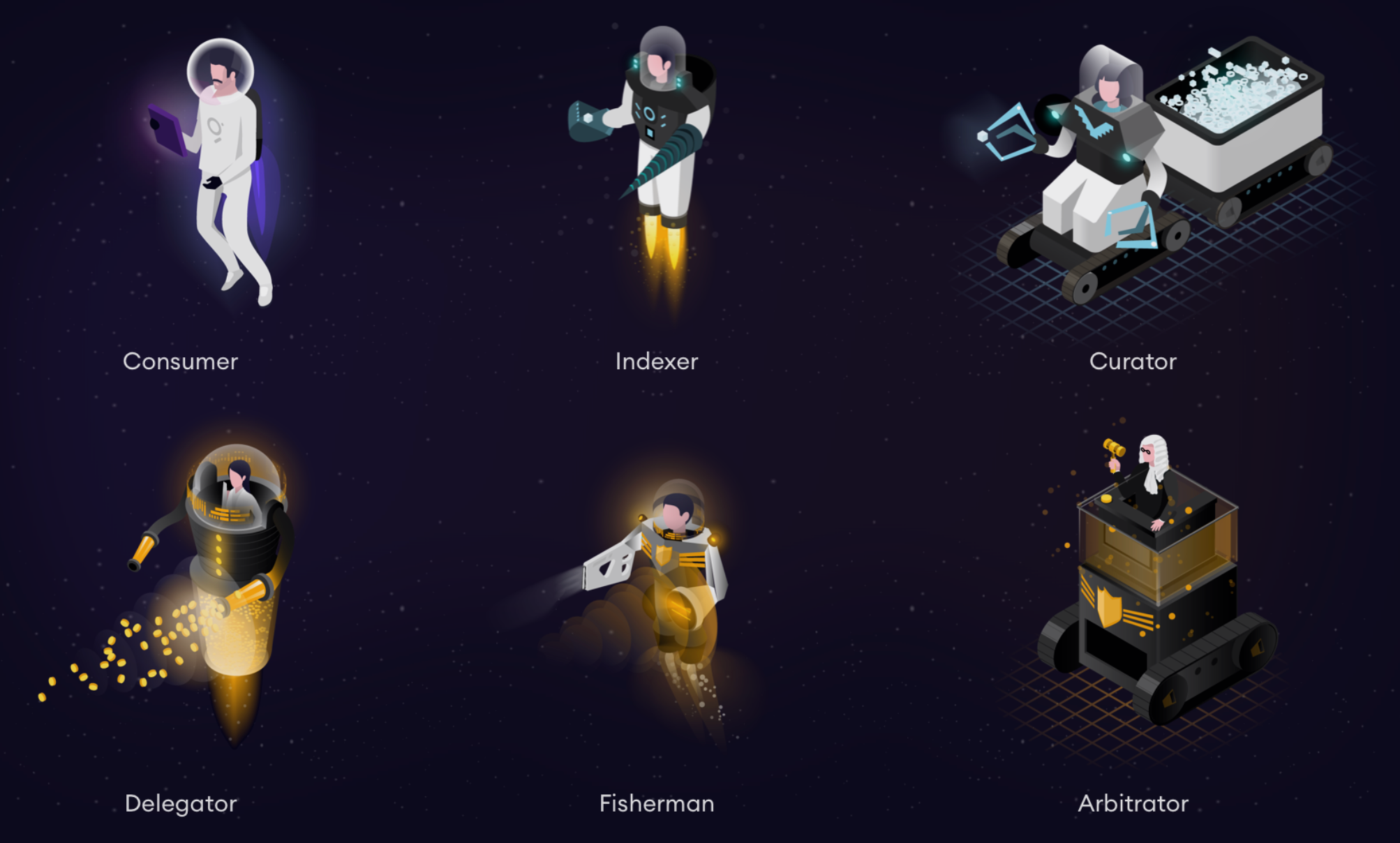 This is a place for developers to create subgraphs and add metadata, then deploy the subgraphs for testing before publishing them to the decentralized Graph Explorer or the Hosted Service.

All the subgraphs deployed to The Graph Network, on which the details of each subgraph — from metadata to participant statistics — can be easily viewed. From there, Curators can choose a subgraph they wish to signal to the Indexers, and deposit GRT tokens into it. 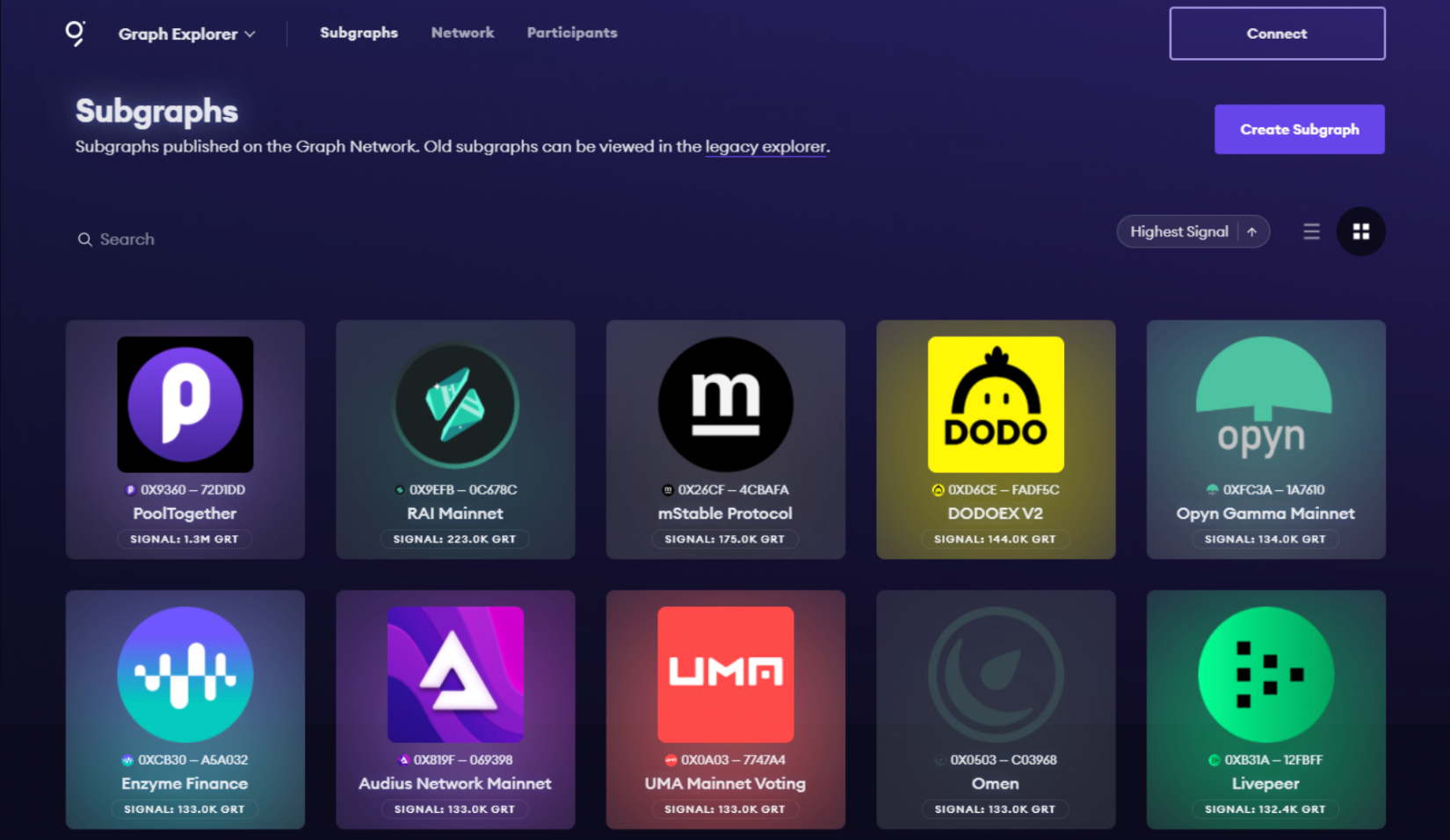 All network participants can view their user profiles on the Graph Explorer, which also includes tabs for Subgraphs, Indexing, Delegating and Curating. They show the historical and active performances of each activity alongside details of accumulated rewards and fees.

The Graph Network supports only the Ethereum blockchain. All other blockchains, such as Avalanche and Celo, are currently supported by the Hosted Service, which will be shut down by the end of Q1 2023 with the DApps migrating to the decentralized Graph Explorer.

Either a relevant subgraph to store query data exists or it doesn’t. If one doesn’t already exist, a developer will need to create it in the subgraph data studio.

Once a subgraph is created and published, a Curator will analyze it, and if they are bullish on its potential, they’ll signal it for indexing on the Graph Explorer.

With the signal established, the subgraph will be indexed via the Graph Node, which scans the Ethereum blockchain continuously for new blocks, and serves the data query via a GraphQL endpoint.

Once this process is complete, users can view the query’s result in their applications. They can also leverage Graph Explorer to browse existing subgraphs and perform queries using GraphQL.

What Is The Graph Crypto Token (GRT)?

The Graph token (GRT) is an ERC-20 coin on the Ethereum blockchain, used to allocate resources across The Graph ecosystem. GRT tokens serve as a medium of exchange and reward for community participants, while Indexers, Curators and Delegators deposit GRT to engage in the marketplace.

Apart from streamlining the data service process on The Graph network, GRT also plays a key role in helping govern the network. Anyone holding GRT has the right to vote for and validate changes occurring in The Graph. A GRT coin holder can also accept or decline any changes proposed by The Graph Council that guide future development.

Pros and Cons of The Graph Protocol

Like any blockchain network, The Graph has its own set of advantages and disadvantages. Understanding these pros and cons is crucial for you to make an informed decision. Here’s what you should know:

Convenient: The Graph allows all blockchain data to be queried seamlessly with its use of subgraphs.

Cost-effective: Before The Graph, developers had to either build private query services or rely on third-party data, which are all costly.

Shows Potential: The Graph has the potential to grow exponentially as it keeps incorporating more platforms, DApps, blockchains and smart contracts to expand its index.

Few Blockchains Supported: As a relatively new network, The Graph doesn’t support many blockchains, though many major blockchains such as Polygon are already supported. It has even expanded to include a non-EVM blockchain, Near, which underlines its efforts in expanding its network.

The Graph Crypto Price Prediction — Is GRT a Good Investment?

The Graph (GRT) is unique and solves some major problems for blockchain developers and users, but is it worth the investment? Let’s look at the numbers to get an answer. 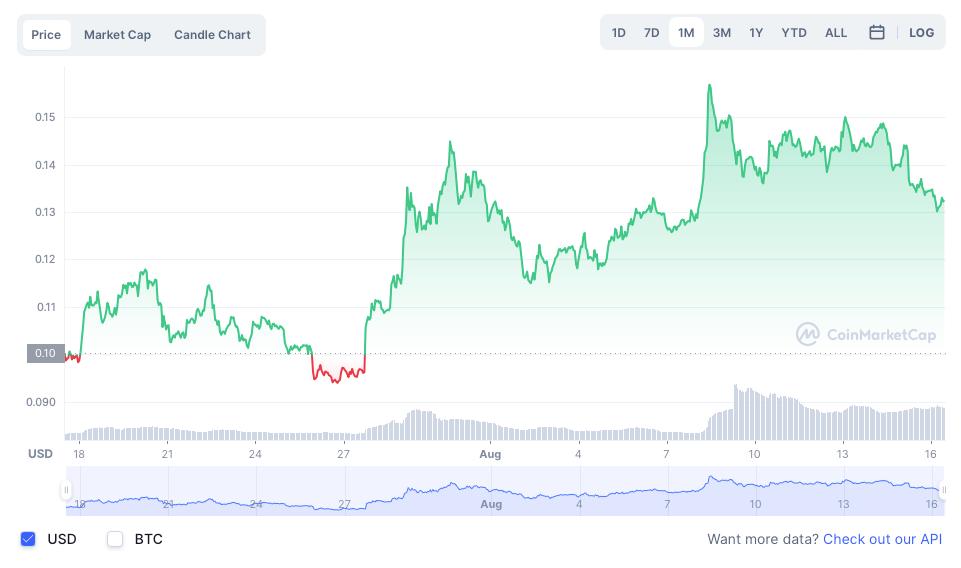 Indeed, it has witnessed a long bear run. However, the demand for GRT crypto has seen steady growth over the past month. The relatively positive momentum of GRT, despite the ongoing bearish conditions, has led some experts to be particularly bullish on the token. CryptoNewsZ has predicted that GRT crypto will be worth $1.27 by the end of 2025. While Price Prediction has a less bullish outlook, it still foresees an increase to an average of $0.48 by 2025.

Despite a long bear run, however, GRT crypto has a promising future. First, it solves a huge problem and has become a core part of web3. Second, The Graph constantly expands its support circle to accommodate new platforms and blockchains. Within a year of its launch, The Graph depicts a healthy growth with over 3 million GRT signaled on more than 200 subgraphs and 2.6 billion GRT staked by Indexers.

With this in mind, let’s venture that investing in GRT crypto might not be a good idea for short-term returns. However, investing in it for the long term could yield great returns.

How to Buy GRT

GRT can be bought at crypto exchanges, with each one having its own set of advantages and disadvantages and requiring different levels of KYC. You can trade GRT as a derivative or a spot on Bybit.

Here’s how you can buy GRT as a spot.

Step 1: Open an account on Bybit and verify it to complete the registration process.

Step 3: Once you’ve purchased your USDT, click the Trade tab, then choose Spot Trading from the drop-down menu. You’ll be directed to the Spot trading terminal.

Step 4: Search for the GRT/USDT trading pair on the left side of the trading platform, which usually displays BTC/USDT by default.

Step 5: Enter the amount of GRT tokens you wish to buy by filling in the values on the right side of the trading terminal. 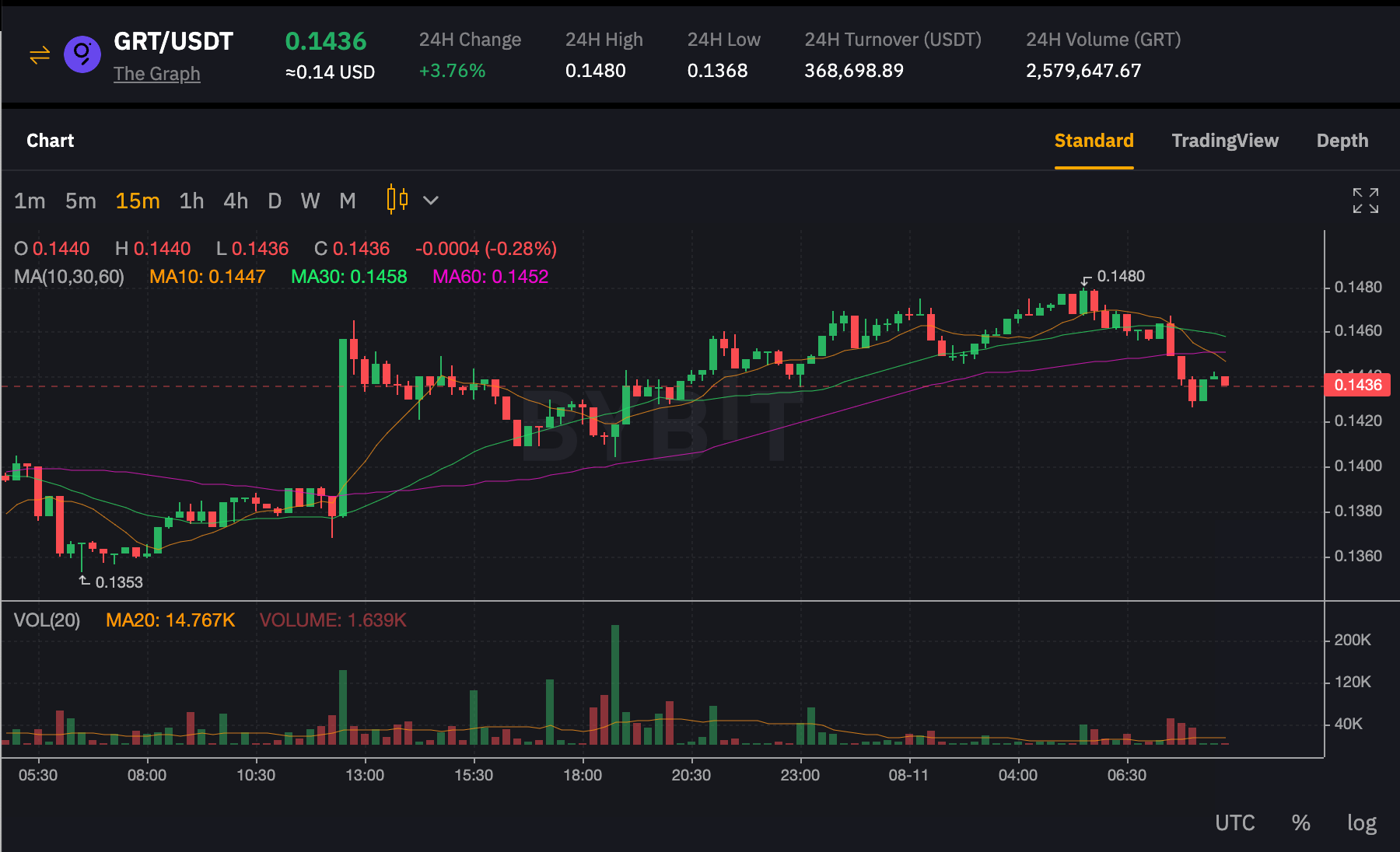 That’s how easy it is to buy GRT coins. Since the user interface is easy to navigate, the Bybit trading platform is a go-to option for new and experienced crypto traders alike.

The Graph indexes blockchain data in a decentralized, seamless manner, making querying data and retrieving results an effortless service that can be easily adopted by all. With its unique approach and effectiveness in the global DeFi infrastructure, witnessing how The Graph performs in the future will be a thrill.