What Is Bitcoin SV (BSV): The Original Bitcoin Vision?

Bitcoin SV (symbol: BSV) is a cryptocurrency that was created to restore the original Bitcoin protocol as envisioned by Satoshi Nakamoto, its pseudonymous creator. Bitcoin SV aims to fulfill some of the key features mentioned in Nakamoto’s original white paper that are nevertheless absent in Bitcoin.

Besides the original Bitcoin, Bitcoin Cash (BCH) is also related to Bitcoin SV. Just what are the differences between these two and Bitcoin SV? We’ll explain it all below. Comparing Bitcoin SV with Bitcoin and Bitcoin Cash will give you a better understanding of Bitcoin SV, and help you decide whether or not to invest in it.

What Is Bitcoin SV?

Bitcoin SV is a blockchain that was created after a hard fork of the Bitcoin Cash network. It stands for Bitcoin Satoshi Vision, and its underlying cryptocurrency is BSV.

Its name comes from the creator of this blockchain, Craig Wright, who claims that BSV’s protocol is exactly what was envisioned by Satoshi Nakamoto.

This cryptocurrency works much like its predecessors, Bitcoin (BTC) and Bitcoin Cash (BCH). Bitcoin SV also uses a proof of work (PoW) protocol to verify transactions, and has the same maximum supply of 21 million tokens, the mining of which is halved at the same rate as BTC and BCH. The primary difference is its block size, which is drastically bigger than that of the previous two blockchains.

To understand Bitcoin SV as it is today, we’ll go back to 2008 and look at the Bitcoin white paper. Written by Satoshi Nakamoto, it outlined the Bitcoin blockchain’s main features. The first stated fact was that the Bitcoin network would be an electronic cash system. These words were one of the main reasons for creating Bitcoin SV (BSV).

The original Bitcoin blockchain has a small block size of just 1 MB though it has now increased to 2 MB with the SegWit activation in 2017. This means that when the network is busy, with too many people trying to complete transactions, the transaction fees go higher and higher as the traffic grows.

If you’re willing to pay the high gas price, then your transaction will be accepted in the next block. But for those of you who won’t pay that fee, your BTC will be stuck for a long time. This is what’s known as the Bitcoin scalability problem, and it makes Bitcoin a non-contender for an electronic cash system.

As Bitcoin’s popularity grew, its scalability issues began to have a real impact on the blockchain. The congested network and exorbitant fees led to the creation of a hard fork in August 2017, which created a separate blockchain called Bitcoin Cash.

Bitcoin Cash (BCH) has a block size of 32 MB, much bigger than that of the original Bitcoin blockchain. Initially, Bitcoin Cash seemed to conform to the Bitcoin protocol, but eventual structural changes prompted a faction within the community to reject Bitcoin Cash. These changes were viewed as a threat to the security and validity of the original Bitcoin protocol. To BSV’s supporters, the only way to improve Bitcoin’s scalability was to increase the block size.

BSV was effected through a hard fork of the Bitcoin Cash blockchain in November 2018, just over a year after the establishment of Bitcoin Cash.

Its creator is an Australian computer scientist named Craig Wright, who claims to be Satoshi Nakamoto, although there’s little evidence to support that assertion.

The underlying reason for creating BSV was the same as for the previous fork: To solve the “scalability problem” and finally create a practical electronic cash system. Initially, this blockchain increased the block size to 128 MB.

In July 2019, the BSV network introduced an upgrade, Quasar, which increased the block size to 2 GB. Later in February 2020, the Genesis update removed the default hard cap for block sizes in the Bitcoin SV blockchain, thus creating an essentially unlimited potential for scaling.

Bitcoin SV works on the proof of work (PoW) algorithm, similar to Bitcoin and Bitcoin Cash. Hence, miners earn some BSV as block rewards for every transaction they verify on the Bitcoin SV network.

Each new block contains a hash of the previous block, as well as new transaction data. Since there’s practically no hard cap on block size in the Bitcoin SV blockchain, transactions are processed much faster on its network.

While Bitcoin SV shares some similarities with Bitcoin, the primary difference between Bitcoin SV and Bitcoin is the block size. Bitcoin SV block sizes are uncapped, while Bitcoin’s maximum block size is now at 2 MB with the SegWit activation in 2017. This translates to several differences in the two networks’ outputs.

Transaction Fees and Speed for BSV and BTC

Because of the large block sizes, the Bitcoin SV network can support over 50,000 transactions per second. Compared to that, Bitcoin’s peak transaction throughput is only around 7 TPS. This feature gives BSV the power to finalize transactions almost instantly. 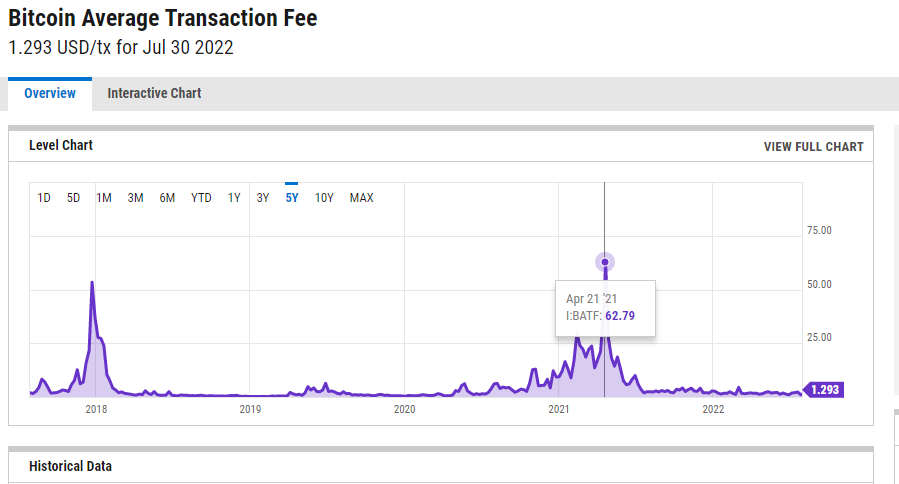 That’s because during the bull market, at times of network congestion, fees would go through the roof and transactions would get stuck for days in the Bitcoin blockchain. Bitcoin SV’s less-congested mempool, along with its lower transaction costs, make Bitcoin SV an ideal blockchain for daily microtransactions.

Energy Requirements of BSV and BTC

The original Bitcoin blockchain requires a tremendous amount of energy for mining. The Bitcoin network consumes an annual average of 130 terawatts of hours of energy, comparable to the entire country of the Netherlands. 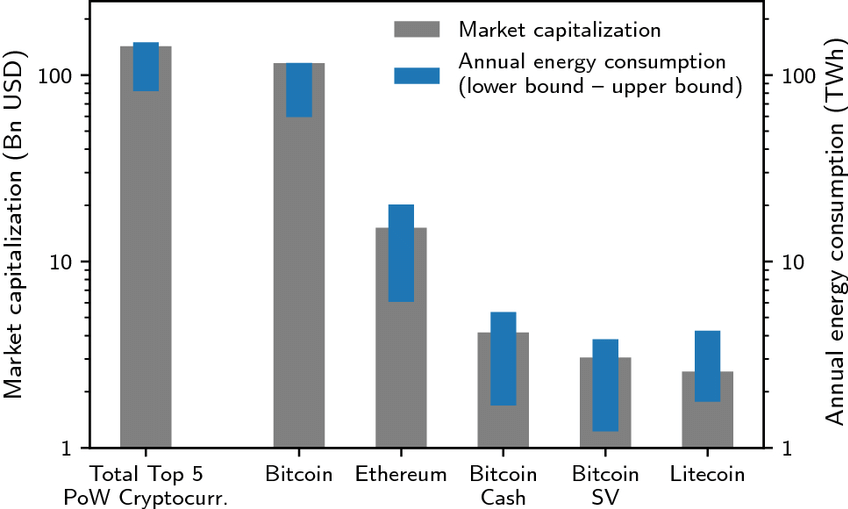 On the other hand, Bitcoin SV is a much greener technology because it requires less energy due to its larger block sizes and less congested network.

NFTs and smart contracts, supported by blockchain technology, are making waves in the crypto world. The original Bitcoin protocol doesn’t support smart contracts, but the Bitcoin SV network does. This is a critical difference between the two. It could also be one of the biggest reasons BSV might surpass BTC in value.

Despite the larger block size, many block factors remain the same, from the SHA-256 hashing algorithm to the halving schedule. This means BSV miners actually get much less for putting in the same amount of effort.

As mentioned, Bitcoin Cash was the first major hard fork of the original Bitcoin protocol. Both Bitcoin Cash and Bitcoin SV have much better capability to scale (due to their larger block sizes) than Bitcoin. They both also support smart contracts.

However, Bitcoin Cash’s maximum block size of 32 MB, while a lot larger than that of Bitcoin, still pales in comparison to the essentially limitless blocks of the BSV network.

Transaction Fees and Speed for BSV and BCH

The Bitcoin Cash network can process an average of 116 transactions per second, whereas the BSV blockchain can process 50,000 TPS on its testnet.

The transaction fees for Bitcoin Cash transactions are usually less than one U.S. cent, but still slightly higher than BSV fees, as you can see from the comparison chart below. That makes BCH a better option than Bitcoin for the electronic cash system that Satoshi envisioned.

As we’ve covered above, 6.25 BSV per block is the miner’s reward for verifying transactions on the Bitcoin SV network. This makes Bitcoin Cash more profitable than Bitcoin SV for miners.

Bitcoin SV’s main competitor, Bitcoin, remains the world’s most popular cryptocurrency. It’s nearly impossible to beat Bitcoin in terms of branding and image. But as a medium of crypto payment, Bitcoin SV can potentially outperform many other cryptocurrencies, including Bitcoin Cash.

The value of BSV is predicted to rise in the next few years because of its solution to the scalability issue, a problem plaguing not only Bitcoin but many blockchains in the crypto world. Since Bitcoin SV can process transactions quickly and requires low transaction fees of less than half a cent, it could even be a real competitor to credit card companies that charge high fees.

Also, Bitcoin SV is energy efficient and considered a green technology, so it’s expected to appeal to the masses — as compared to Bitcoin — as the world grows increasingly environmentally conscious.

Where to Buy Bitcoin SV

You can buy Bitcoin SV from any online crypto exchange, such as Bybit. Bybit is among the best exchanges as it’s easy to use, safe, fast, and provides convenient round-the-clock multilingual customer support.

How to Buy Bitcoin SV From Bybit

Follow these steps to buy BSV as a derivative from Bybit:

It’s surprising that more people don’t know what Bitcoin SV is, as well as its potential to become the ultimate peer-to-peer digital cash network.

No matter how much Bitcoin grows in value, its use cases simply can’t come close to BSV’s applications because Bitcoin SV has faster transaction speed and lower transaction fees, due to its larger block size.

Since Bitcoin SV has great potential, it may be a good idea to invest in the network now when it’s in its early stages.

Overall, the long-term bullish prediction for BSV is encouraging because of the network’s ability to scale efficiently as a green technology. If you’ve never considered Bitcoin SV as a worthy investment yet, now is the time to give it a second look.